A complete kitchen remodel can be a stressful undertaking in the best of times. Ours was done in 2009, during the depths of the so-called “Great Recession” while the rest of the house was undergoing extensive renovations. I didn’t know at the time whether my job was going to survive, so we were definitely taking a financial risk. But the existing kitchen had too many problems– everything from poor workmanship and cheap materials to code violations– that it would have severely hindered any potential sale in the event that we had to relocate. Whether we stayed or moved, the kitchen remodel was a necessary investment.

I have covered the extensive problems with the kitchen previously, if you want to see what we started with.

It all starts with a functional layout

Having an architect design our kitchen was the best decision we could have made. He recommended blocking off the doorway to the hallway and relocating the stove to that wall. Now our kitchen is no longer a high traffic area. It is purely a cook’s kitchen and it functions well in that capacity. While it is a small room, there is enough space for a couple people to work comfortably without tripping over one another. And,most importantly, we now have a proper work triangle!

The concept of the work triangle dates back to the 1950′s and was developed by the University of Illinois. The criteria for an efficient kitchen was that the stove, sink and refrigerator form the points of a triangle. The maximum distance between any two points should measure between 4 and 9 feet and the total length of the three sides, when added together should not exceed 26 feet.

A lot has been written about the work triangle recently, mostly to discredit it as an outdated relic that no longer applies to the modern kitchen where there are more than two appliances. Modern kitchens, the designers say, are much more complicated and should be designed around the way the client will use them– that is, adapt the kitchen to the client rather than have the client adapt to the work triangle.

I would argue, however, that the basic concept of the work triangle still has merit and is a good rule of thumb to follow, especially in a small kitchen such as ours. This design works for us and it works very well.

Choosing materials in a kitchen remodel can be an overwhelming experience. In addition to the cabinet design and material, there is also the cabinet hardware, counter top, backsplash and flooring materials to consider. Every decision is an opportunity for second-guessing and it is easy to nickle and dime your budget to death with upgrades. You don’t want to over-improve, compared to other properties in your area. But you also don’t want to under-improve either. Finding the right balance can be challenging.

Our kitchen cabinets were custom-built by a local independent woodworker. We chose a simple square recessed panel door in natural cherry (no stain, just clear coat for protection). At the cabinet maker’s recommendation, we opted for veneer rather than solid wood. He told us quite bluntly that we would never see the difference and it would be much less expensive. This was before discussing the price so I have no idea what the price difference actually would have been. Certainly, there are purists who will claim that we “cheaped out” or cut corners by not going with solid cherry, but we didn’t exactly have unlimited funds. By this time, our cash reserve was disappearing at an alarming rate.

We chose granite counter tops with tile backsplash and tile floor. Because we have hydronic heat, we were able to add in-floor heating, not only to the kitchen, but also the bathroom and hallway. Lighting is provided by recessed lights in the ceiling and by under-cabinet fluorescent lights. We later replaced the bulbs in the ceiling fixtures to LEDs. 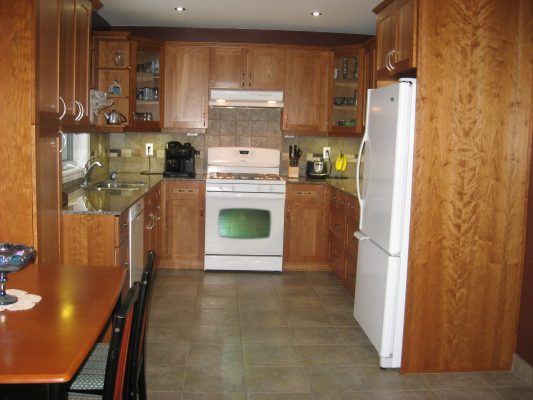 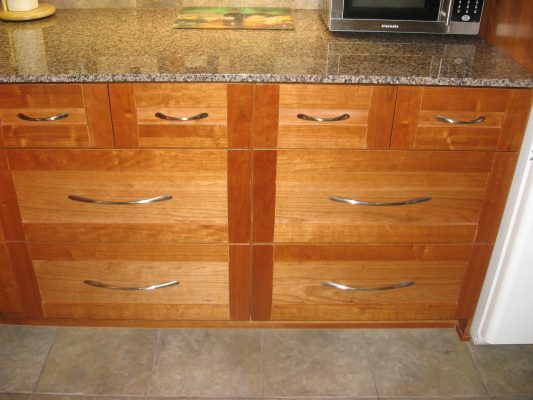 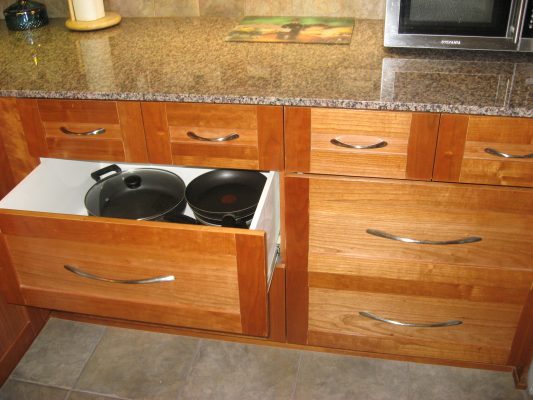 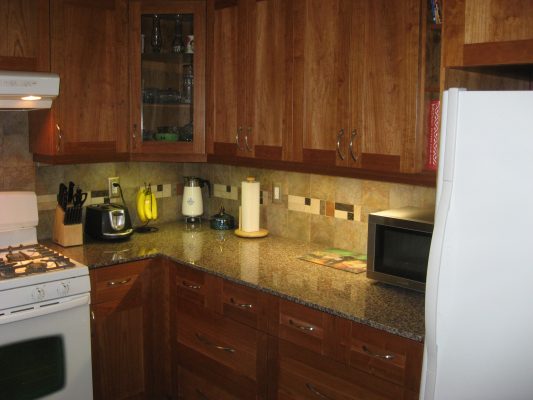 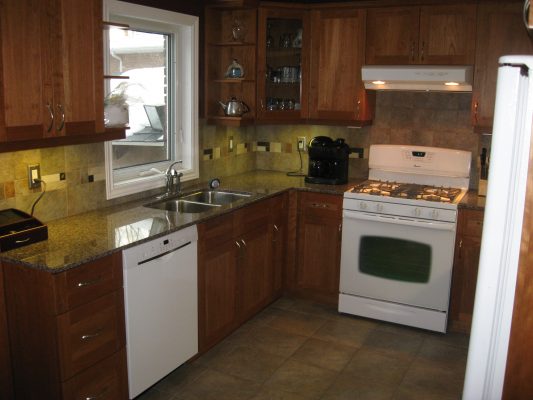 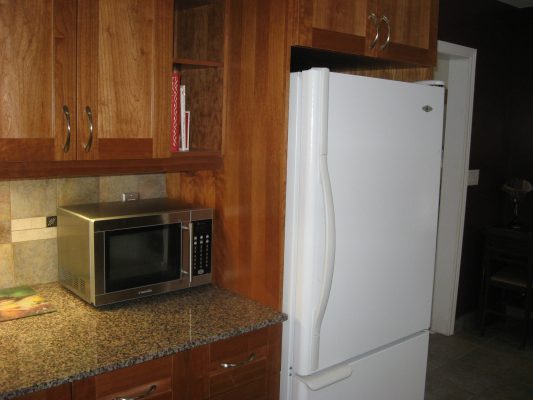 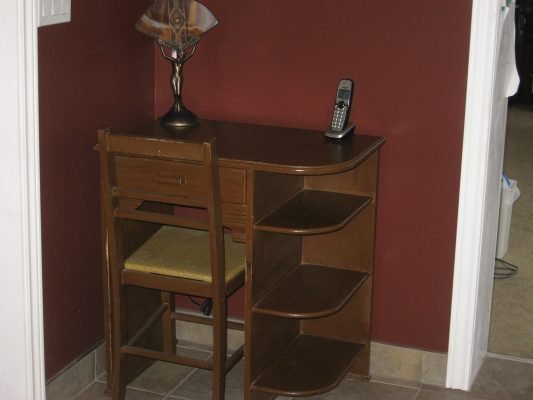 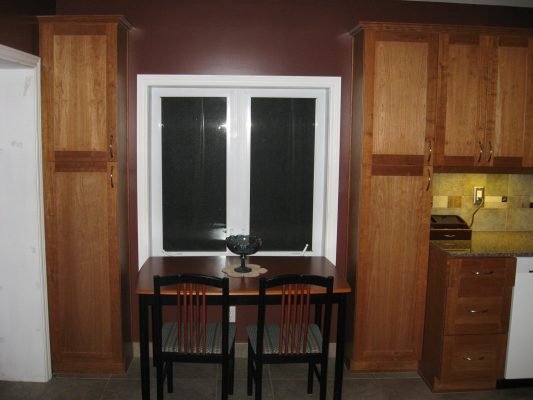 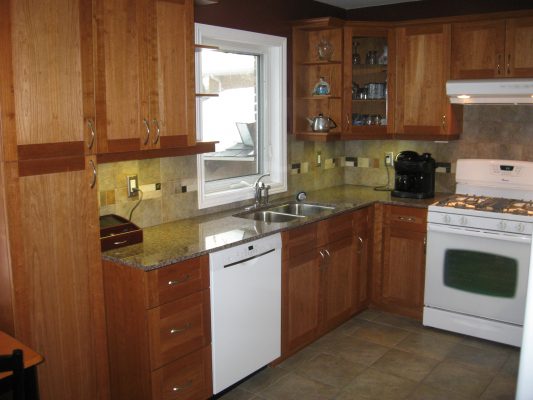 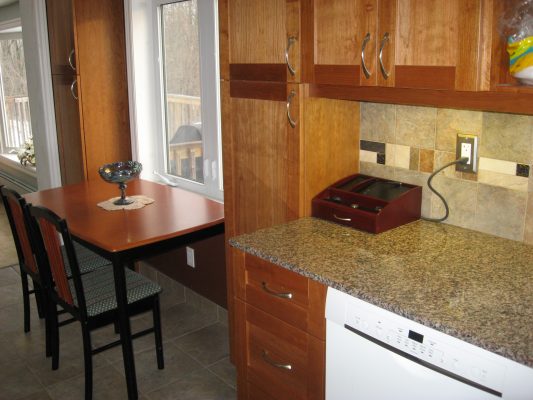 So, did we make the right choices?

I had never had anything but vinyl flooring underfoot in kitchens before. The hard tile takes a little bit of “getting used to.” The in-floor heat is a luxurious touch. Otherwise, the floor would be very cold. The tile backsplash looks fantastic with the cherry cabinets.

The biggest question mark is the granite counter tops, which were an upgrade from laminate. Knowing what we know now, we might have considered quartz. Many argue that it is a much better material than granite because it is stronger, less porous and more durable.

Also at issue is the thickness of our counter-top material. The granite retailer with whom we did business offers two thicknesses: 3/4 inch and 1.5 inch. Before we even talked about price, they recommended the 3/4 inch thickness because we don’t have any overhangs more than the standard one inch, and the cabinets offer sufficient support for the counter. Did we make a mistake by going with the smaller thickness? Time will tell. Personally, I like the look of the simple clean edge and thinner profile. The counters were installed in 2009 and as of the end of 2015, there are no signs of any problems.

The microwave sits next to the fridge, an ideal location for reheating leftovers. Rather than going with a microwave-hood vent combination we chose separate fixtures for a couple of reasons: