Our house is heated by a boiler system that sends hot water to baseboard radiators.  This type of system is clean and efficient, when it is designed properly.  Unfortunately, our system suffered at the incompetent hands of both the previous owner and a clueless plumber that I had hired.  The result was a cold house that struggled to get above 54 degrees on the coldest days of winter.

It took the plumber– an expert who specializes in hot water heating– seven days to completely reconfigure the plumbing starting right from the boiler.  In fact, the boiler is the only part of the system that isn’t new.  We now have a heating system that works, with multiple zones.

The plumber removed all of the old pipes and disconnected some gas lines that we no longer want or need and began installing the pipes for the new system.

The plumber finished most of loop serving the main floor and ran another loop up to the guest room on the second floor.

Meanwhile,  I constructed a wall for mounting the pumps.  It was a good opportunity to kill two birds with one stone–  the first:  make the plumbing neat and accessible;  the second: solve yet another structure problem.

The fact that the one corner of the back landing was supported by a two by four that was not only twisted, but had been notched near the top, had been bothering me for quite some time.  But the old plumbing was in the way so there was nothing I could really do about it.

In this close-up picture, you can see how the 2 x 4 was pulling away from the rest of the structure.  Who knows how much longer it would be before the nails popped out completely?

Having made a similar repair in my old house, I attacked this one with confidence, and, I must say, overkill. I jammed a couple of temporary over-sized studs to support the landing while I cut away the old 2×4 and built a new supporting wall.  Tapcons fasten the bottom plate to the floor.  I used a sill gasket between the bottom plate and the concrete.  The top plate is attached to the 2×8 joists of the landing.  I cut the studs for a tight fit so there would be no movement after removing the temporary support.

The triple stud is a little deceiving.  Only two of the studs actually support the corner. The plumber asked me to make the wall wider, which is why you see the third stud on the right.  That last stud doesn’t actually support anything other than the plywood sheet that I attached to the structure.

The double 2×4 stud is enough to support the landing. But now the weight of that side of the landing is evenly distributed along the supporting wall. The 3/4 inch plywood adds a lot of strength to the entire structure. This is one part of the house that ain’t going anywhere!

The plumber mounted the zone pumps today and it’s a work of art.

This is how plumbing should look.  It’s easy to tell the difference between a professional and a hack. Neatness counts.  All the fittings you see coming out of the boiler are brand new.  The zone pumps are mounted on 3/4 inch plywood.  Each of the two bedrooms upstairs is on its own zone, the main floor of the old part of the house and the family room addition are also on separate zones.  The fifth zone is for the indirect hot water tank.  And in the future, we can expand the system so the basement will be on a separate zone as well.

The plumber completed his work after 7 days for a total of somewhere around 50 hours.  As you might guess, we now have a vast network of copper piping in the basement, but it is incredibly well organized, especially when compared to the system that was there before. Best of all, it actually works. When you turn adjust a thermostat, the boiler fires immediately and you can feel the heat coming from the rads within a minute.  It’s a shame that we have temperatures in the 90′s right now because I would love to put the system through its paces.

Mind you, we paid a premium for this job and it will take us a while to pay down the debt that has resulted, but it will be well worth every penny just to be warm in February. Of course, by the time we finish paying for it, global warming may render the heating system obsolete, but we’ll worry about that later. 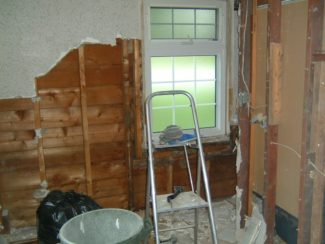 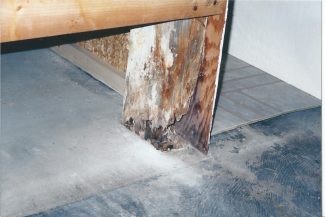 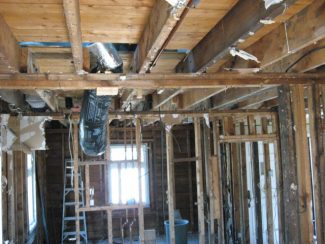