I have hung several laundry cabinets over the years.  This time I tried something so simple that I feel stupid for not trying it before. It is always a struggle holding a cabinet in place and keeping it level while trying to screw into the studs. By taking an extra step before finishing the assembly of the cabinet I was able to hang it easily,.  And I did it without messing up the paint on the wall. To quote Homer Simpson, “I am so smart, s-m-r-t,….”

A ledger board (usually a 2×4) is attached to the wall for bottom the cabinet to rest on during installation.  This is the usual method of installation, but that leaves holes to patch and paint to touch up. With my method, I didn’t have to worry about that step.

Even better,  I could have done a French cleat (see right). The cleat and the back piece are cut at matching angles so they interlock (right).

The key is to first determine the stud locations and start the screws in the backing board before attempting to hang the cabinet. I did it alone, I did it relatively quickly, and I didn’t damage the wall paint at all.

We bought a Whirlpool work surface that fits directly on the washer and dryer.  (Update 2016: no longer available)  Above is the cabinet, which I installed yesterday. 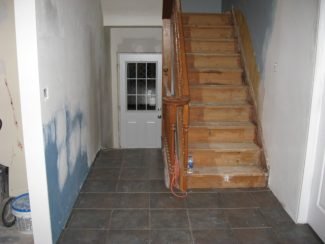 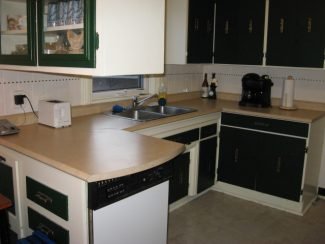