Easy fix for a sump pump that does not shut off

Affiliate disclosure: This page contains affiliate links. I earn a modest commission for any purchases made through my links.

Let me set the scene. It is a dark and stormy night (well, rainy, anyway).  Strange noises are coming from the basement. The ugly fat guy goes downstairs to investigate. If this was a horror movie, I would have been the killer’s first victim. The source of the noise was our submersible sump pump sucking air. It was not shutting off after draining the pit. And it was starting to smoke from overheating.  Sump pumps are not designed to run continuously so this was definitely a repair that needed immediate attention.

I consulted the owner’s manual. According to the troubleshooting guide, the switch was the likely culprit.

The same owner’s manual also indicated that the switch needed to be replaced every two years to comply with the terms of the so-called lifetime warranty. Great! The warranty does not cover the switch. And because I had never replaced the switch in five years, the warranty was not going to cover any damage caused by switch not shutting off.

The manual also stipulated that the pump should be taken to an authorized repair center. But we live in Canada and the website doesn’t list any Canadian repair centers. Besides, we would not want to be without a pump while waiting for a repair anyway.

So that left me with two options: call in a repair guy or attempt to fix it myself. The part and the service call would probably cost as much as a new pump, so that option was off the table. I could possibly fix the pump myself, if I could get the part.

Off I went to that store with the orange square logo. I explained my problem to the sales associate. I asked if replacing the switch was a DIY job and where I could find said switch. After trying to sell me a new sump pump, he pointed to the mechanical float switches on the wall and told me that was what I needed.

Now, I know there are people out there who will think all this is obvious. But it wasn’t to me, so I have to believe there are others who will find this helpful.

Our pump is equipped with a vertical float. The float rises with the water level until it trips the switch, turning the pump on. The pump drains the pit to the point where the float is low enough to trip the switch off.  Our switch was stuck in the on position.

The mechanical float switch is basically electrical cable with a piggy back plug at one end and a tilt switch mechanism inside the float at the other end.  The pump plugs into the piggy back plug so that the float switch now controls the power going to the pump. The cable needs to be tethered somehow so the float will tilt up and down with the water level, tripping the inside switch.  I used zip ties to attach it to my pump.

Be sure the float moves freely.  It won’t work if it gets hung up on pump or on the side of the pit.

We don’t have a whole lot of room in our pit, so the float is on a fairly short leash.  The pit only fills about halfway before the pump trips on.  That’s fine, for now. A submersible pump relies on water for cooling, so we may be shortening the life of the pump. This is a temporary solution.  When we rebuild the addition, we’ll be addressing any drainage issues and will replace the pump then.  And I certainly will keep the mechanical float switch just in case we have a similar emergency in the future.

I was fortunate that the switch was stuck “on.”  Had it been “off,” we probably would have had to replace the pump.

In November or December of 2013, I recorded a shorter video without the distraction of my lame attempt at creativity to replace this one on my YouTube channel. . However, since this video has received a bit of traffic and prompted a bit of conversation, I have chosen to leave it up. To avoid duplicate content, I decided to not upload the other video. I vow that in any future videos I will focus on usefulness rather than creativity.  I should also note here that this is only my second video, so the quality “ain’t that happenin'”. 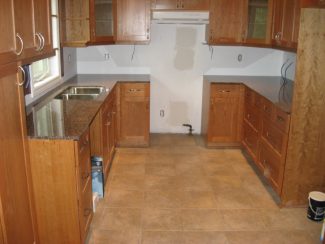 The Major Renovation: The final week 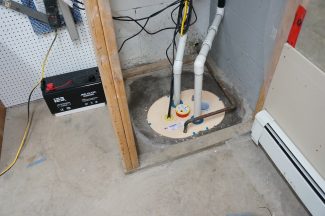