Originally, there was a cabinet built into the area under the side landing.  It was nothing fancy– just some basic storage.

My first plan was to remove all the non-structural elements (the plywood wall, doors and shelves) and create a built-in book shelf.

That demolition led to the discovery of what was a potentially serious problem:  one of the main support posts for the side landing had severely rotted.  The builders had set the post in the concrete slab. Fifty years of wicking up moisture from below the slab had reduced two 2 x 6’s to the structural equivalent of maybe a 2×2.

The hip bone’s connected to the leg bone…

Before making the repair, we had to determine exactly how the structure went together.

The joists (A) support the landing floor and upper stairs (B).  The joists (A) are in turn supported by the blocks of the outside wall at one end and a cross member (C) which ties into the support posts (D and E).  Both the upper and lower stair structures tie into support post E, which, as luck would have it, was the damaged post.

At this point, I decided against the built-in bookshelf and chose instead to just build a simple stud wall.  It just seemed easier and time was of the essence.

The area behind this wall is accessible from the laundry room, so we don’t waste the space and can use it for additional storage.

To make use of the space under the lower part of the stairs, I built a box that would serve as a cubby for the cat litter pan for our two cats.

It worked reasonably well and both cats got some use out of the new location. Sadly, though, neither cat was still with us by the time we finished the basement.

Fortunately, the cubby was also large enough for a recycling or storage bin.  I simply had to make a plywood door to cover the opening.

The stairs were sheathed with hardboard, which was flexible enough to conform to the curve. Using 2x2s, I extended the treads and risers by an inch and a half to allow the installers to tuck the carpet underneath. Where the steps curved, I traced the curve onto wider material (2×4 or 2×6) and cut it to width.

After priming the hardboard with an oil-base primer, I applied Fibre-Decor for a unique textured surface. 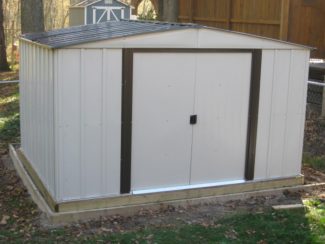 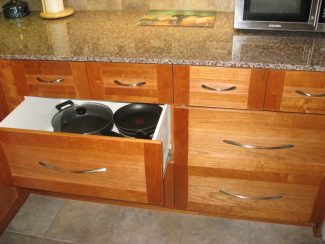 Room to spare in the kitchen 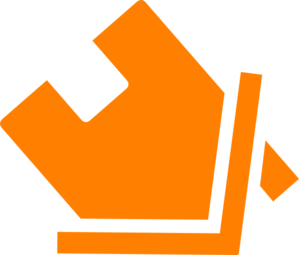