Fixing water damage and structure in the Dormer

Originally, a built-in bookcase was situated on the landing between the main main level and second floor of our house which was part of a dormer structure. It wasn’t necessarily pretty but we thought it would be the perfect place for our photo albums. It would just need a little cosmetic work.

However, as the demolition of the second floor progressed due to the insulation issue, I decided to rip out the bookcase and build another one later. As I proceeded with the removal, I discovered some severe water damage to the drywall. When I removed the drywall, it was apparent that the framing had some substantial rot.

The two horizontal 2×4’s were the top plate of the main floor structure and the bottom plate of the dormer structure. They were so severely rotted that I was able to crumble them with one hand with very little effort. The studs were also significantly damaged.

Water infiltration could have come from two possible sources. Originally, the eaves trough was nailed directly to the siding (no fascia board) and water came in through the nail holes. I had actually witnessed this during a particularly heavy rainfall. And it was confirmed to be an issue when we had roof and eaves troughs were replaced. The roofers installed a fascia board to solve this problem.

Another possible leak source was the old window. But that should have been resolved when we had a new window installed shortly after moving in.

As I was demolishing the bookcase, siding was being installed on the exterior of the dormer. I was confident at this point that any water infiltration would now be a thing of the past (it wasn’t). However, I still had to deal with the damage that had already been done.

I attached a 2×4 across the studs and propped it up with a 3 or four other 2×4’s supported by the landing floor (not shown).  I then surgically removed all the damaged portions of the top plate and the studs.  The new top plate in this area is somewhat lower than the original so that I could securely fasten it to the 4×4 posts on either side of the landing area using Simpson Strong Ties.  I sistered the studs and toe screwed them to the new top plate.  To attach the sheathing boards to the new structure I used some L-brackets (also by Simpson).

I was fortunate that I could access all the damaged wood once I opened up the wall.  The rest of the dormer is part of the bedroom and the top plate supports the floor joists.  That repair would have been truly nightmarish.

Serious problems with the window structure

I was concentrating so much on replacing the rotted wood that I missed another obvious problem.  At some point in this house’s past, someone replaced the original windows in the dormer with larger windows, but did not properly modify the structure.  Instead, he had just cut a larger opening and slapped the window in place.

You can see how the studs had been cut to accommodate the larger window. Without a proper header supported by jack studs, the window is actually supporting some of the weight of the roof.

The repair I had done may have been adequate for replacing the existing structure, but it did not address the lack of structure around the window. I decided it was time to call in a professional contractor who had the experience and confidence to properly fix the dormer.

A typical wall consists of a vertical studs between the top and bottom plates. Where the window interrupts the studs, the header transfers the weight of the structure above the opening to the jack studs. The jack studs (also known as trimmers) are attached to the full-height king studs. The size of the header depends on the size of the span and the weight it supports.

The contractor removed the window and set aside and completely removed the 2×4 studs from this area, cutting them off at floor level.

He installed a 2×6 bottom plate attaching it to the floor of the landing and the tops of the studs he had cut.  Next, he attached a 2×6 top plate existing 2×4 top plate and installed the new studs.  The header over the window, comprising of 2 – 2×8’s with OSB sandwiched in between as a spacer, came next, followed by the sill and remaining studs.  What was once a mish-mash of sloppy or questionable workmanship (including my own) is now a strong and sturdy structure.   As an added bonus, we took the opportunity to move the window and center it in the landing area.

We moved into the house in the Spring of 2003. The repairs done in Summer and late Fall 2003

Structural Repairs: How we “unbutchered” our house 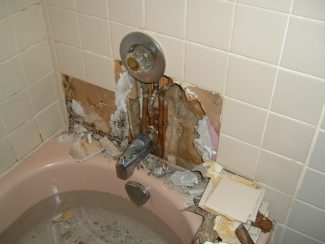 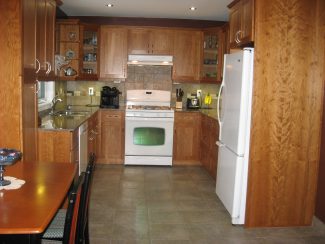 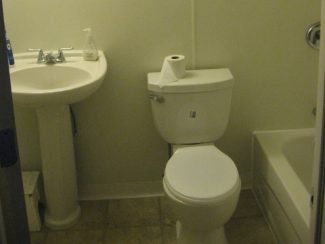