This post is part of a series outlining what we did to correct numerous structural problems in our house.

We cannot blame the previous owner for everything that was wrong with our house. Some of that blame goes to the builder who was responsible for the back dormer. The dormer roof was flush with the wall. The lack of an overhang did not allow for proper ventilation (no soffit vents) and also offered little protection from the elements.

In 2003, we repaired water damage to the framing. We had replaced the window and siding and assumed that we had solved the problem. It would be several years before we would finish the second floor, so we did not notice that we still had a leak.

No job too big, no job too small (well, this one was…)

In 2011, our architect drew up some quick plans for extending the roof. This would allow for soffit vents for proper ventilation, and would also offer some protection from the elements. However, finding someone to actually do the work proved to be difficult. The job was too small for construction contractors, and a lot of roofing companies don’t do framing. After much searching, we were finally able to hire a roofing and siding company willing take on the project

We would learn that when our first contractor moved the window, he missed a spot when he caulked around it causing a water leak. He also did not fully insulate one of the cavities at the top of the wall resulting in a condensation problem along the drip edge when warm interior air met cold outside air.

The roof extension was added in January 2012.  We have not had any water issues since. 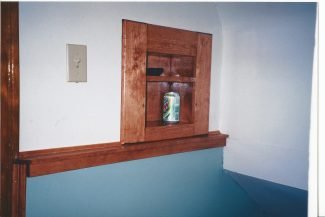 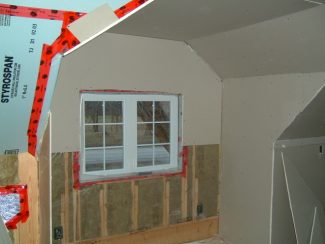 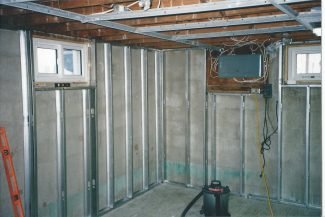